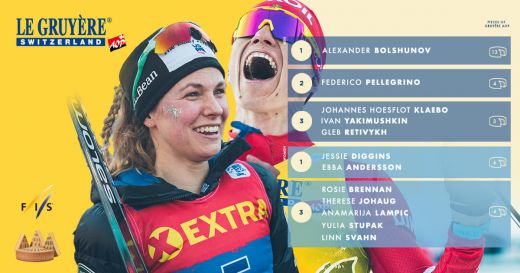 Update on the Cheese Challenge
In October we reported on a special initiative from FIS Cross-Country and their partners Le Gruyère AOP. We caught up with FIS Cross-Country to see how progress is going on this unique idea:

SnowKidz: Thanks for taking the time FIS Cross-Country, how has the season been so far?

FIS Cross-Country: Its been a bizarre season from the organizers aspects but we definitely had some exciting results and competitions and are very grateful to have been able to go through with the Tour de Ski. Its especially nice to see new faces being able to fight for the podium.

SnowKidz: Its funny you mention new faces because its closely connected to the initiative you are doing with Le Gruyere AOP. Can you recap for us what it is?

FIS Cross-Country: Of course. Athletes who race to the podium in one of the World Cups sponsored by Le Gruyère AOP, each one of them receives a 2.5kg piece of Le Gruyère cheese. This has been a tradition for some years now and together with Le Gruyère, we wanted to take this nice tradition further. It was the wish of Le Gruyère to engage the next generation Cross-Country skiers and soon the Gruyère Challenge was born. The idea is simple. All won pieces of cheese are counted to a ranking and the athlete with most pieces of Le Gruyère cheese wins the challenge. The awesome fact is that the prize of the Gruyère challenge is money that will be donated by Le Gruyèrer AOP  in the name of the respective athlete - to their own youth club. In addition, as a physical prize, the winning athletes will receive an original Swiss cowbell. In connection with Le Gruyère cheese and the meaning of the bell  to mark the highest ranked of the pack with the loudest bell  it is a wonderful and valuable prize also for the athletes themselves. The ranking divides the women and men standings and the breakdown is as follows:

So in essence the athletes are not only racing for themselves but also their ski clubs.

SnowKidz: So the athletes are heavily involved. How has their feedback been?

FIS Cross-Country: Winning a piece of Le Gruyère cheese has always been a highlight already for the athletes and teams and internally the challenge of counting how many kg cheese each team has, has been going on for a while. With this additional cause, the appreciation and motivation has become even bigger. In the end, athletes know first-hand how valuable the donation to youth clubs is.

SnowKidz: Currently, Alexander Bolshunov leads the mens rankings with 13 podiums. Then, Jessie Diggins and Ebba Andersson tied in the womens. How do you foresee the results in the future?

FIS Cross-Country: Its too early to tell. We still have 9 races that count ahead of us  including a Relay and a Team Sprint where each athlete gets counted in the ranking of course and therefore everything can change. Well have to wait and see at the end of the season.

SnowKidz: Exciting stuff! Well, thank you for the quick update. We hope the fun continues on tour and best of luck in the next events.

FIS Cross-Country: No thank you for the time. Best of luck to all the SnowKidz Organisers we hope they have a good remainder of the season.